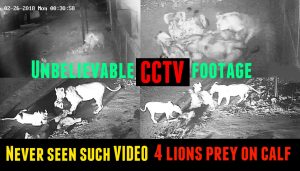 Junagadh residents are no strangers to seeing lions strolling on roads in the town, especially near the Bhavnath taleti (foothill).
However, for the first time, a group of four lionesses ventured into the industrial area of Junagadh Gujarat Industrial Development Corporation (GIDC) estate and camped there for nearly six hours after preying on a calf. They merrily feasted on the prey and left only after the forest department staff reached there and guided them into the sanctuary adjacent to GIDC.

Junagadh GIDC-2 is located on the bank of Sonrakh river while the Gir sanctuary is located on the other side of the river. At present, the river is dry and therefore lions have an open route to reach the GIDC area through the riverbed. There is a wall between the river and GIDC premise. The four lioness who were in search of prey entered in GIDC premise by jumping this wall.

The entire hunting was captured in GIDC’s CCTV camera and some people too videographed the incident in their mobile phones while sitting in the cars.
GIDC president Lalji Mawani said, “We have often seen leopards in the GIDC area. But this was the first incident when lions entered our premises. It did create a scare among people working in the units which operate till late night.”

There are nearly 6,400 people working in 385 units of GIDC-2 and most of them are engaged in plastic reprocessing and automobile accessories manufacturing.
Chief conservator of forest, wildlife circle A P Singh, said, “I will seek an inquiry report into this incident. Lion is a social animal and can adjust in human habitats. Only if they feel that there is a prey, they enter the areas of human population but they never harm anyone. There could be multiple reasons why the lionesses entered the GIDC area.”

Lions are frequently seen loitering on the road to Bhavnath Taleti on the foothills of Girnar mountain and up to Sakkarbaug Zoo which is located in the Junagadh town. The wild cats entering villages are common in outer Gir areas like Amreli district, where t here have been several instances of lions camping right in the middle of the roads while feasting on their prey.

Former member of wildlife board and lion expert, Revtubha Raijada, said, “Considering frequent instances of lions venturing so close to human population, there is an urgent need to spread awareness about their behaviour and how people should react seeing them in their vicinity. Many times people gather in big numbers seeing the lion in their areas and preys on an animal. Looking at the crowd, the lions leave their prey and return. But this angers them and they could attack humans.”