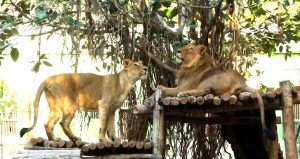 By Virat A Singh – Mumbai
Hopes for finding suitable mates for Mumbai’s only captive lions — a male and a female pair of siblings – have been diluted after Sakkarbaug Zoo in Junagadh, Gujarat rejected the long-standing request for mates.

The siblings are lodged at the Sanjay Gandhi National Park, and currently, the park has only three captive lions including two males — 15-year-old Ravindra (15) and seven-year-olds Jespa and Gopa. While Ravindra is now old to mate, the siblings cannot be mated for fear of inbreeding and the risk of genetically flawed cubs.

“We have been following up with Sakkarbaug Zoo for almost over a year now,” said an SGNP official, “and even offered them a pair of Rusty Spotted Cats in exchange. While they were open to the arrangement till late last year, they turned down our request last month.”

The official said that adding a new pair of lions at SGNP will not only boost current numbers, but also increase chances of having healthy cubs in future. 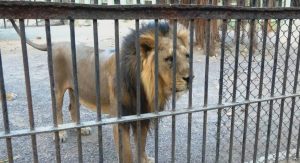 The lack of new lions also dilutes the appeal of the park’s 14 hectare lion safari, it’s biggest attraction. The safari is currently under renovation, and will be for six more months.

“We have to procure at least one new pair before the safari opens as we cannot allow Jespa and Gopa to be together in the safari due to fear of them mating,” said another official. “Tourists would like to see more lions and we are planning to restart correspondence with various zoos, including Saakarbaug, to seek alliance for the lions.”

Forest department sources said that they were also exploring a ‘political’ solution for this problem, by reeling in Forest Minister Sudhir Mungantiwar who is keen on developing tourism activities at SGNP. “Since even Gujarat has a BJP-led government, we would request him to speak to his counterparts and seek a pair of lions for SGNP,” said the official.

Previous Post Four lions enter GIDC in Junagadh city and prey on calf Next Post India’s pride and joy: Saving the Asiatic Lions in Gir with Upma Bhatnagar on The Lion Kingdom